Who doesn’t enjoy a delicious crêpe? Even better when a father and son duo decided to open a crêperie 18 months ago in downtown Dartmouth. Over the past 24 months the downtown core has seen a resurgence in the retail and food industry; mostly started by young, enthusiastic entrepreneurs. Mr. S and I are always delighted when we hear about new ventures coming to our neighbourhood. When Neil and his son, Max, opened their doors back in October 2015, we were one of their first customers. Portland Street Crêperie (55 Portland Street) is a delightful 16-seat bistro with 4 additional tables for outdoor seating in Spring through to the Fall. Large windows mean an abundance of natural light making for a cheery place to enjoy a meal there.

During the interview, I asked who was the brains behind the venture and without hesitation, Max said it was Neil. They started talking about opening a resto in the Spring of 2015. With support of family and friends, the guys tossed around a couple different concepts but in the end decided on a crêpe business. 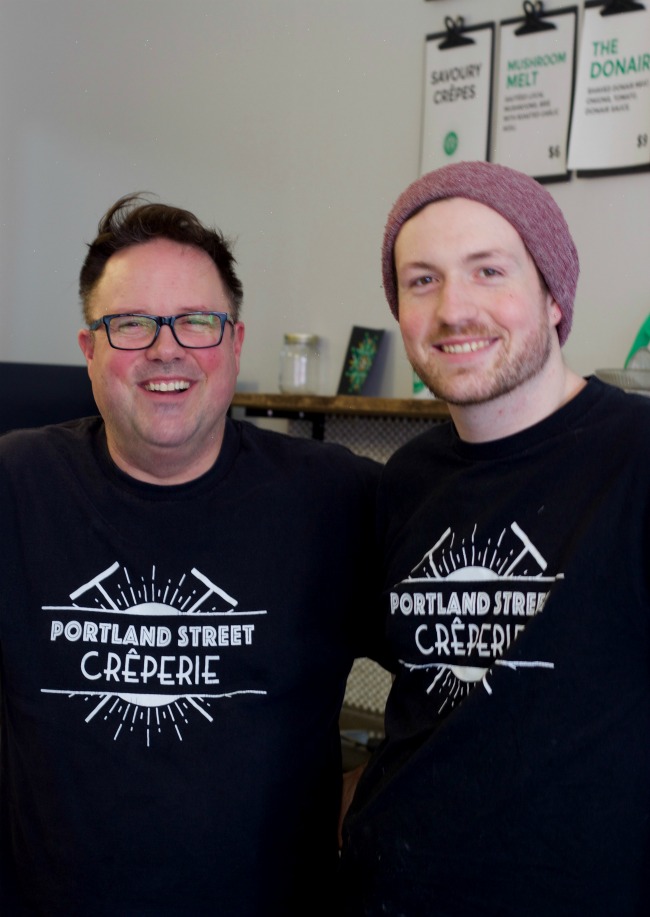 TCC – How many attempts did you have to make in order to get the batter to where you thought it was presentable?
Max – Laughs and then says quite a few.  The batter itself was probably a couple dozen attempts until I fine tuned it. Then spreading the crêpe, the technique took a bit to master as well. You have to have respect for the crêpe is what we always say.
Neil – While Max was working on the batter, I was working on the business side of things; business plan, finding the space, renovating, lease details, finances et al.
TCC – What was in the space before you took over?
Neil – A restaurant called the Midday Bistro.
TCC – So it was good that it was a food establishment before?
Neil – Yes and a kitchen out back; a good fit for us.
TCC – How is it working together as a father and son team on a fairly consistent basis?
Max – I think it’s pretty great. We’ve been working together for a year and a half now. We have a pretty good relationship, still.
Neil – I think it’s a good thing and to have clear conversations. Sometimes we don’t always agree, but we’ll have a clear, respectful conversation on both sides. And because of the dynamics of who we are, our personalities, we move forward fairly quickly. So, yeah, it’s great. A privilege and very fortunate.
TCC – That’s awesome. What is your popular savoury and sweet crêpe? 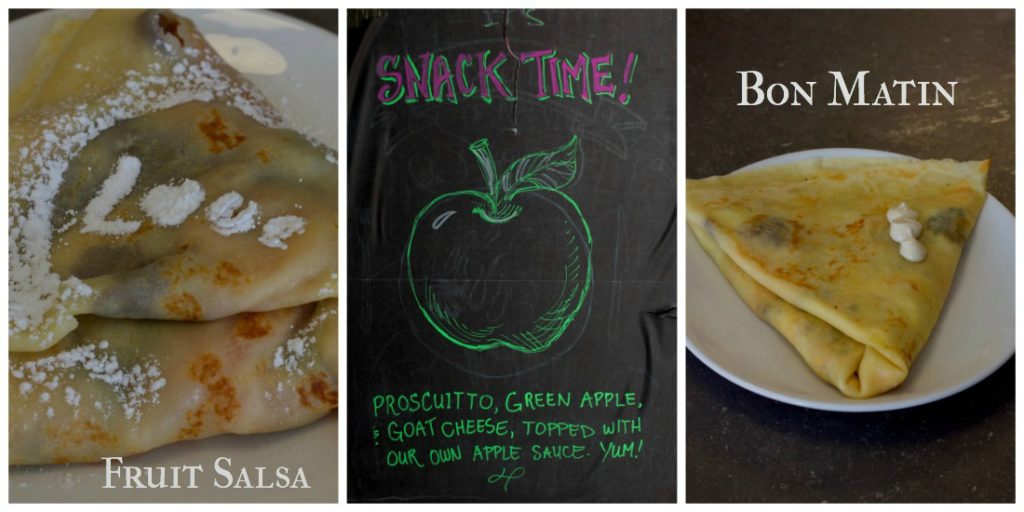 Neil – We shop local as much as we can. We have plans to introduce asparagus and swiss cheese kind of crêpe when asparagus season is open. We’ll go to the local market to buy the asparagus. We work with Off Beet Farm and use their sauerkraut with locally smoked salmon. We also work with local coffee roasters, Anchored Coffee and Nova Coffee. 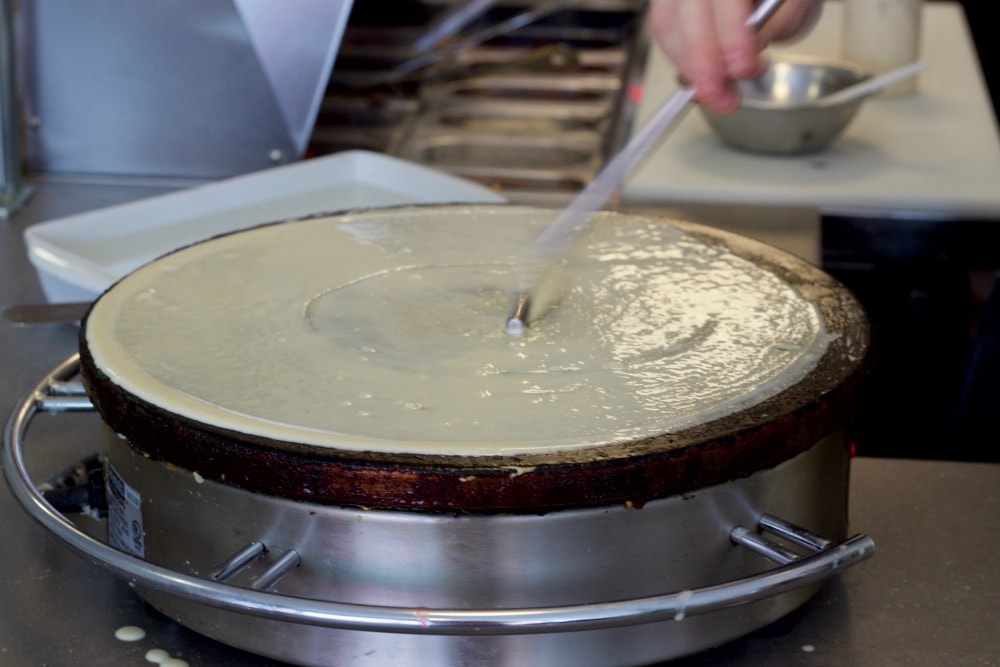 TCC – What determines the flavour of the week?
Max – Seasonally; what feels right influences what we place on the menu. We have 12 crêpes and what stays is what the public likes. We recently had a sweet one called The Jill (cookie dough, crème anglaise, smarties) and that was only supposed to a feature for the week but the response was incredible. It was named after a woman who won a contest we hosted. People really loved it so it’ll be back. 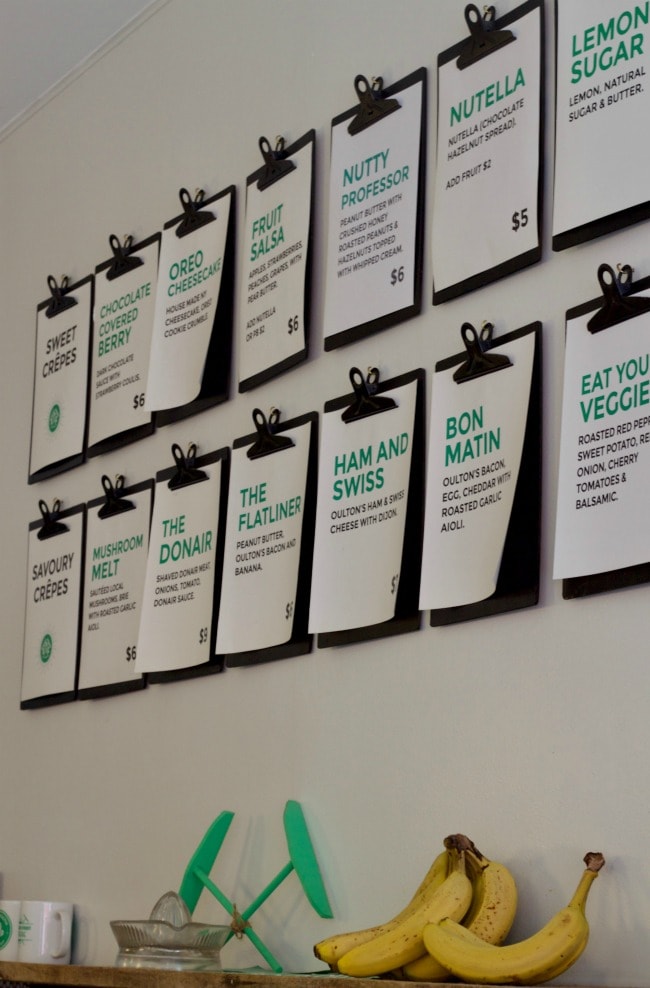 TCC – What are your plans for the future?
Neil – We’re in the process of licensing. It would be nice to have a local cider and one local beer. Nothing too fancy, just an option for our customers. In France, crêpes are typically served with a hard cider. We have acquired new equipment so we may be doing some pop-ups by working with strategic partners. What we have is working so we don’t want to mess it up too much.

The Culinary Chase’s Note:  Neil and Max make an enviable team; compassion in their work, respect for one another and a product the public can’t seem to get enough of.  Their lunch rush hour Monday to Friday is 11am to 2pm and on the weekends they’re busy until they close.