My sister came to visit us last weekend and one of her requests was to visit Ground Zero.  We have been here a year now and although have walked by, we never realized a tour was available to the public.  Still under construction, the perimeter of Ground Zero is boarded off for safety reasons making it difficult to see what’s being constructed and what has been built.  John went online to see if there were tours and found the 9/11 Memorial Tour.  You need tickets to gain entry and only a certain number are allotted every day.  We wanted to visit on Saturday but the website said the next available day was Sunday at 3:00pm.   Not to be deterred, we headed into the city knowing that we may not be able to get in.

Timing and luck is a funny thing in that loosely laid plans tend to work out better and such was the case on Saturday.  Celebrating Kris’ arrival the night before meant we slept in a bit later than usual pushing our arrival at Ground Zero at 1pm.  An official of the tour said people purchasing tickets to go to the left and those with tickets to the right.  We looked at each other in amazement.  Yes, we were going to do the tour after all and the next one started at 1:30pm…we couldn’t have timed it better!

Our tour guides were a husband and wife team, Al and Maureen, who have been volunteering their time for these tours since 2006.  They started off by going through snippets of information prior to the airplanes crashing into the towers.  Maureen and Al took turns speaking as we meandered through security, and walkways prior to entering the hallowed ground of Ground Zero.

They held up photos to describe what had happened and the horrific loss of 2,983 lives. 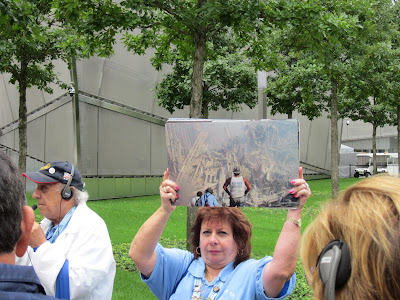 343 of those lives lost were firefighters and their 23 year old son, Christopher, was one of them. 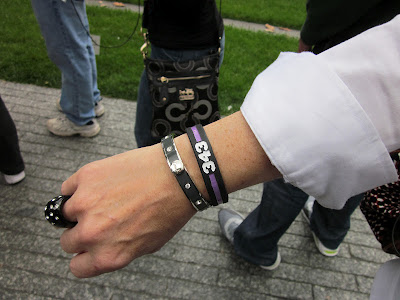 Maureen told us that September 11th was supposed to be a wonderful day for her as that was her first day of retirement.  She envisioned it with champagne and chocolate dipped strawberries instead her husband called her and told her to look out their high-rise Brooklyn flat to see this. 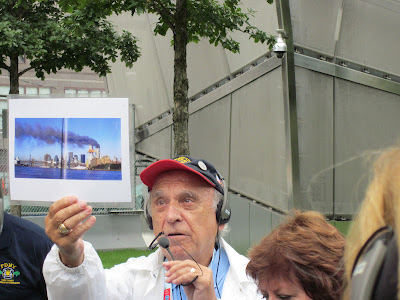 For weeks they kept thinking their son would walk through the front door.  Finally, after attending many memorials they decided to hold a memorial for Christopher on December 1st.  A few days before that the coroner called and said he made a mistake in identifying the remains of a male (thought to be someone else) and that those remains – the only one found from Ladder 10-10 – was that of Christopher.  Finally, Maureen said, our son came home!  The three of us, very emotional at this point, shed a tear for them (we weren’t alone).  It was after that we felt more connected to the loss and wondered if this was how others felt.  Eleven years ago we heard the reports from the television but nothing prepared us for the personal accounts, love and passion coming from Al and Maureen.

Before the tour ended, Maureen said that if we had time to visit the American Express building across the street to view their Eleven Tears memorial for 11 of their employees who died that day.  She said it’s a beautiful 600 pound crystal suspended from the 2nd floor ceiling where water droplets drip from representing tears.  The crystal is surrounded by an eleven-sided granite memorial with names of the 11 American Express employees. 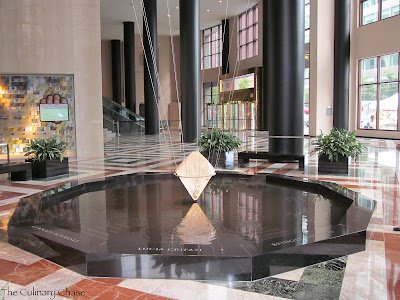 A man from Mobile, Alabama presented Al and Maureen with a t-shirt, thanking them for all that they have done and continue to do. 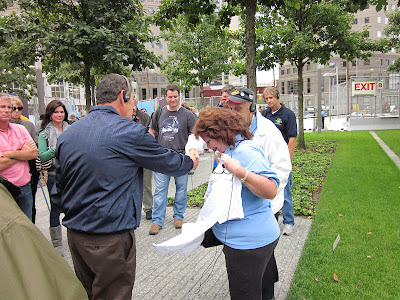 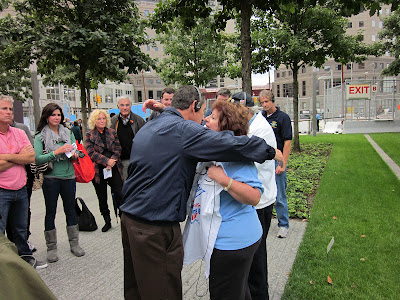 The Culinary Chase’s Note:  This is a must-see tour for anyone who lives in or plans to visit New York City.  Al and Maureen gave a very heartfelt thanks to everyone and said it meant a lot to them that people still care – 11 years on.  The tour is volunteered by people who lost a loved one and this posting is my small tribute to those who share their personal stories. 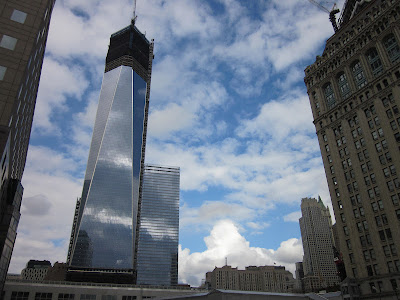