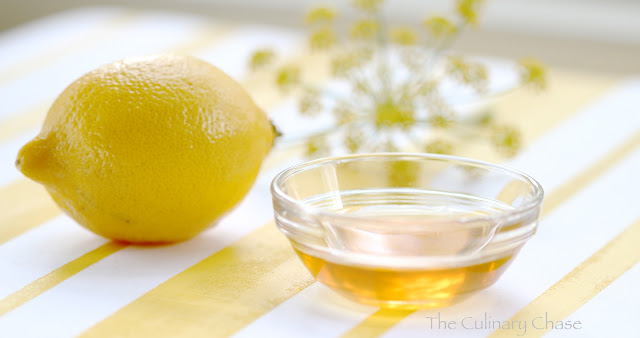 When I was three months pregnant with my daughter, my doctor said I had a touch of sinusitis…it was painful but not as much as a full-on sinusitis (experienced this 2 years later).   Medication was out of the question so I decided to make myself a cup of hot water mixed with lemon juice and honey.   Back home this was called a hot toddy (sans alcohol).  I grew up with my grandmother always having a natural solution for cuts, scrapes and colds.   Some of these folklore remedies were passed on from her mother’s generation often mixed with anecdotes from the old country (Bohemia) and substituted with what was available in the new country (Canada).  My grandparents would often hear from older farmers how to fix something using the earth as their pharmacy.  So let’s take the two ingredients that everyone has in their kitchen instead of going to the pharmacy and make a natural concoction to help ease the common cold.

First, let’s start with a lemon.  They are a good source of vitamin C which is also known as an effective natural cough suppressant.  Lemons have antiviral and antibacterial properties.

Honey contains anti-fungal, anti-inflammatory, and antibacterial properties which can help combat disease-causing organisms present in the body (also provide comfort and relieve a cough).  Take 1 tablespoon of pure honey or add it with warm milk or hot tea.   Honey helps coat the throat to ease soreness as a result of excessive coughing.

Water is certainly the most overlooked remedy for various diseases and ailments. Double your water intake if affected by coughing.  Water also lessens the dryness in your throat.

The Culinary Chase’s Note:  Turn your kettle on to boil water.  While this is boiling, take a lemon and cut in half.  Squeeze half the lemon juice into a large mug.  Use the squeezed lemon half and cut into chunks.  Add lemon chunks to mug and add hot water.  Sweeten with honey, cover, and let steep for 5 minutes.  Drink this 3 times during the day.  The next day you should feel better.  Repeat the following day, if desired.

Posted in Uncategorized and tagged honey, how to treat a cold, lemon, natural pharmacy, water