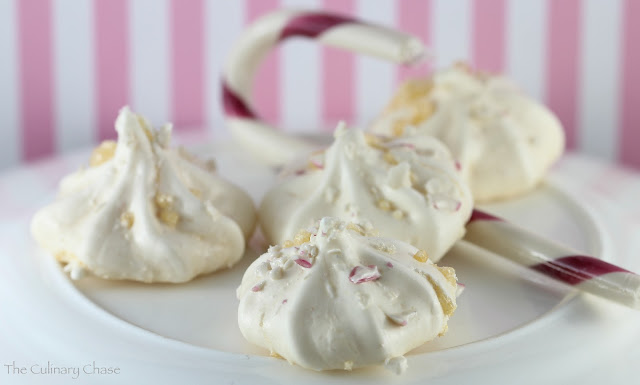 According to Snopes.com the candy cane came to being in Europe during the latter part of the 17th century but they were plain white.  The red stripes appeared in the beginning of the 20th century.  Christmas cards produced before 1900 show plain white canes while striped ones appear on many cards early in the 20th century.

I usually have Christmas music playing while I bake or cook during this time of year and one of my favorite songs is sung by Frank Sinatra, “The Christmas Waltz” which was recorded in 1968.

Frosted window panes, candles gleaming inside
Painted candy canes on the tree
Santa’s on his way, he’s filled his sleigh with things
Things for you and for me

Ev’ry song you hear seems to say “Merry Christmas,
“May your New Year dreams come true”
And this song of mine in three-quarter time
Wishes you and yours the same thing, too

Put the egg whites in a medium bowl. Beat with an electric mixer on medium speed until foamy. Increase the speed to medium high and beat until the whites hold soft peaks. Continue beating while gradually adding one portion of confectioner’s sugar. Beat until firm, glossy peaks form. Add the peppermint extract and mix briefly. Sift the remaining confectioner’s sugar over the meringue and gently fold in until blended.

Scoop the meringue into a large pastry bag fitted with a large (#8) star tip. Pipe swirled kisses (about 1-1/2 inches wide and 2 inches high) about 1 inch apart onto the prepared cookie sheet. Sprinkle the finely chopped candy cane over the kisses.

The Culinary Chase’s Note:   Light and airy…just the way meringue is meant to be!  Enjoy!